The following blog post is Part 3 of the Dungeons and Dragons 5th Edition campaign, Dreadstorms Lost. These blogs are intended for other game masters who might want to use this campaign setting and the scenarios to inspire their own role playing games. (Free for noncommercial reuse.)

Kazel and Foreshot Dreadstorm have been Berlstrum’s champions for over a decade. Berlstrum has enjoyed peace and prosperity under their protection. The champions work with the mayor and town council in regards to town safety. They deal with any dangerous elements threatening the town.

In exchange for their service, the champions have been given a manor/castle to live in and a regular stipend from the Sovereign. Only the Sovereign can award the position of champion to a town. 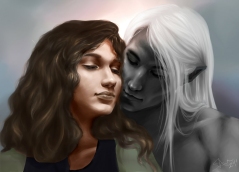 Before Kazel and Foreshot were offered the champions post in Berlsturm, they were a part of the Deadly Omega 6 gang. (More on these guys in the next installment.) Bards delight in singing tales of these great heroes’ deeds. Some of it might even be true.

Rumors of a hidden treasure from the couple’s infamous adventuring days are a topics of idle speculation, but nothing has ever been found. Berlstrum does get the occasional visitors wanting to challenge the pair for reputation gain or in hopes of finding their fabled stash. They are dealt with harshly.

Foreshot was a highly talented ranger in her adventuring days. She prefers to avoid the limelight whenever possible, spending a lot of her time hunting game and roaming monsters outside the city walls.

As part of the Protector Program, Foreshot is mentoring Clemens in the ways of the ranger. He has a room on the lower floor of their manor.

Foreshot is a tempering influence on Kazel. Without her, he tended to be a bit looser with his morals. Kazel is devoted to his wife, Foreshot, but worries about her  human lifespan.

Kazel considers himself a dark elf. Anyone who suggests he is drow will see the might of his fury and possibly a magic missile at their nearest possessions.

Kazel Dreadstorm is a “retired” wizard who sells potions, scrolls, and enchantments in his shop, The Glass Eye. With his beautiful dark elven skin and luscious silky white hair, he gets a lot of visitors who come to flirt with the famous champion. Kazel is good at redirecting these fanciful flirtations into sale at his store.

Kazel and Foreshot created the Protector Program to aid in the day-to-day protection of the city. Those with aptitude and desire to learn the skills to become potential guardians, soldiers, adventurers are given training in their chosen field of interest. The program is intended to teach survival outside the safety a city’s walls and encourages exploration of the world.

In exchange for the free training, each Protector Trainee spends one week each month as a town guard; usually sentry duty or assisting with minor nuisances. Trainees are not paid wages, but are provided with a mentor who gives them room and board in exchange for work (varies depending on the mentor). Mentors are volunteers. Quality varies.

The trainees all meet weekly in the Champions’ Manor meeting hall where current problems are discussed, schedules handed out, and stories of past glories told.

For Game Master Only:

Our heroes have heard the call for protectors. And each for their own reasons has answered the call and successfully become a protector trainee. They will begin the adventure at 1st level. Details on the starting scenario next issue!

Recently, the Dreadstorms have been sending bards to recruit for the Protector Program and seem intent on increasing their numbers. Their bard friend, Jester Red, has been especially helpful in locating potential participants throughout the country of Briarstone.

A secret only a very few know is that Foreshot is pregnant and the soon-to-be parents want to make sure that their town has sufficient protection when their champions will be most vulnerable.

Next up: Okay. Now we know who the Champions are. But what about that group, the Deadly Omega 6? They sound cool. What’s their story? #3.5 Deadly Omega 6 – Origins – Dreadstorms Lost

#1-4 of the Dreadstorms Lost Campaign are backstory and setting information. If you want to jump ahead to where the players comin in: #5 – The Adventure Begins – Dreadstorm Lost

SteveStillStanding.com
Art doesn't have to be worthy