THE FOLLOWING BLOG POST IS PART 16 OF THE DUNGEONS AND DRAGONS 5TH EDITION CAMPAIGN, DREADSTORMS LOST. THESE BLOGS ARE INTENDED FOR OTHER GAME MASTERS WHO MIGHT WANT TO USE THIS CAMPAIGN SETTING AND THE SCENARIOS TO INSPIRE THEIR OWN ROLE PLAYING GAMES. (FREE FOR NONCOMMERCIAL REUSE.)

It is recommended that the party be 4th level before starting this dungeon and have at least 4 party members, especially a rogue to help with traps. I’ve included monster stat blocks for the ones that are non-standard and not in the Monster Manual.

Sometimes characters die or players want to run something different. In the middle of a dungeon crawl that can be a bit of a challenge. At the bottom of this page is some flavor text I wrote up for bringing in the new character while the party was in Berlstrum’s Belly.

Dungeon Walls: Sharp briarstone rock make up the walls and ceiling. The crystals are so sharp that one has to be cautious not to cut themselves on the walls. 1d6 piercing damage if pushed/knocked into the wall or ceiling.

Dungeon Floor: Consists of smooth, black shiny stone. When running on the surface, there’s a chance of falling prone (DEX DC 11) due to the slippery surface. Pushes and slides go twice normal distance.

Perception DC 22 to detect the runes etched into the briarstone at the mouth of the cave, advantage on perception if the person spotted a previous Magic Missile trap.
Disarm DC 20

Triggers when a creature enters its 20ft radius; 3 magic missiles (1d4+4 damage) will go to the 3 closest targets within 20 ft.

A large creature on its 2 scaley legs approaches, dragging one of its twisted broken leathery wings behind it. The stub of a tail angrily whips back and forth. From its lizard-like head, scaly flesh hangs, baring the bone beneath. Ribs and other bones peak through obvious mortal injuries along its side. Mindlessly, the creature charges towards your group, emitting a low throaty hiss. 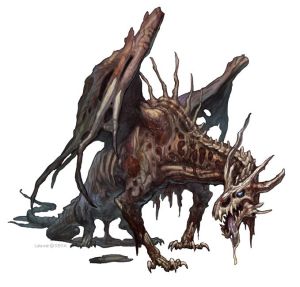 Stinger Stub (the tail no longer has the poisonous stinger, but still does bludgeoning damage as the zombie wyvern instinctively tries to poison its prey) Melee Weapon Attack: +7 to hit, reach 10ft, one creature
Hit: 1d6+4 bludgeoning

No Life Drain. Though this creature is undead, it was undead before the Eye of Orcus ritual began, so it does not have the Life Drain ability.

Undead Fortitude. If damage reduces the undead to 0 hit points, it must make a CON saving throw with a DC of 5 + damage taken, unless the damage is radiant or from a critical hit. On a success, the undead drops to 1 hit point instead.

Amid a nest of bones and other bits of unidentifiable junk you find, wrapped in burlap bundles:

Triggers when a creature enters the traps 20ft radius; On a failed WIS DC 15, targets see a vision of their greatest fears and drops whatever they are holding (weapons) and become frightened. Must use dash action (double movement) to move away by safest route possible, unless there’s nowhere to run.

Once out of site of the trap, effect ends or if in combat, at the end of each turn, target can make another WIS save throw to end effect.

The trap is intended to cause at least one person to run into the next area (to the South) in fear, driving them into the Gibbering Mouthers territory. Once the gibbering mouthers see someone, they will start chattering.

The Gibbering Mouthers will only start their horrible wailing after they’ve spotted a potential addition to their collection.

The two amorphous masses of mouths and eyes ooze slowly forward towards their victims. The cacophonous gibbering from the many mouths murmuring and chattering, wailing and crying – in shrill voices and deep voices – is maddening (DC 10 Wisdom saving throw). The monsters are only silenced when they flows over their victim and absorbs the living flesh.

A pair of undigested legs list against the nearby wall (farthest South). The feet are still wearing some surprising nice looking boot.

Note: The number of ghouls is totally up to how many you think the party can handle, be challenged by, but not out-right slaughtered.

As you round the corner, a cloying scent coats the back of your throat, burns, and immediately prompts your gag reflex. Rotten meat. Feces. Death. You desperately fight the urge to vomit. A mound of dead bodies takes up a large amount of space in this cavern. Looking up you can see an opening to a shaft above the pile. Crawling over the pile of corpses are emaciated humanoid creatures with putrid grey skin. Their razor-sharp fangs tear into the flesh of the corpses, their long lashing tongues seeking the most succulent morsels. Their fingers and toes end in sharp, black claws. They seem focused on their feast, occasionally breaking into squabbles between themselves over a choice bite.

Note: The dead bodies are pretty fresh. Most look like the sort of scum that had been attacking Berlstrum the last couple of days. This hole is a handy place for the people of Berlstrum to toss dead bodies. Tossing them into the sea would draw in all sort of horrible monsters!

Searching through the pile of corpses nets you, well not much really. The bodies were pretty well looted before being tossed down the chute:

One of my players needed to bring in a new character while the group was in the middle of this dungeon crawl. This is description I used to bring him in. It was a bit of a gamble. If the party had decided they didn’t want to mess with the ghouls, this new character probably wouldn’t have gotten very far.

You slowly become aware of your surroundings. It’s impossibly dark. You blink several times. Nothing. You try to move your head to look around. It won’t budge.

You feel weight pressing down on you from every direction, making it impossible to move and difficult to breath. You’re not sure you want to breath anyway. What little air you can get has a dense, cloying scent that coats the back of your throat, burns, and immediately prompts your gag reflex. Rotten meat. Feces. You desperately fight the urge to vomit. The weight pushing on your chest gets worse.

You think you might have passed out for a bit. It’s hard to tell. You manage to breathe through the stench, barely. Your noise feels tickled by hairs.

You wiggle your fingers and toes just to make sure you still have them. Check. You try to move, to shift, to lessen the weight pressing down on you. To scratch your nose. Anything! Something sharp pokes painfully into your back.  A burning sting across your shoulder is followed by the metallic smell of your fresh blood added to the nauseating brew.

A horrific noise, a monstrous howl of hunger muffled by soft tissue. You listen intently. If you could get enough air, dare you cry for help? You hear scrabbling, tearing, more guttural bellows. The weight shifts, presses down on you harder. The hot searing pain of something sharp pushes farther into the flesh of your shoulder.

Wait! Is that the sound of battle?

Before this, the last thing you remember:

Heading back from Castleview, you were almost home when you came upon a rough group of travelers. They asked you if you knew where the champions’ home was. Tired and really just wanting to go to sleep, you nevertheless offered to take them there. And then it all gets kind of hazy.

Up Next: More beastie encounters in the next Dreadstorm installment.