When fighting a battle with harpies in a forest, sometimes you have to get creative with those trees and nests!

Full view of the battle grid with the “trees” I used for the harpy battle. Tress included upsided down vases, plastic cubs, a California raisin, and some fish tank tree decorations. 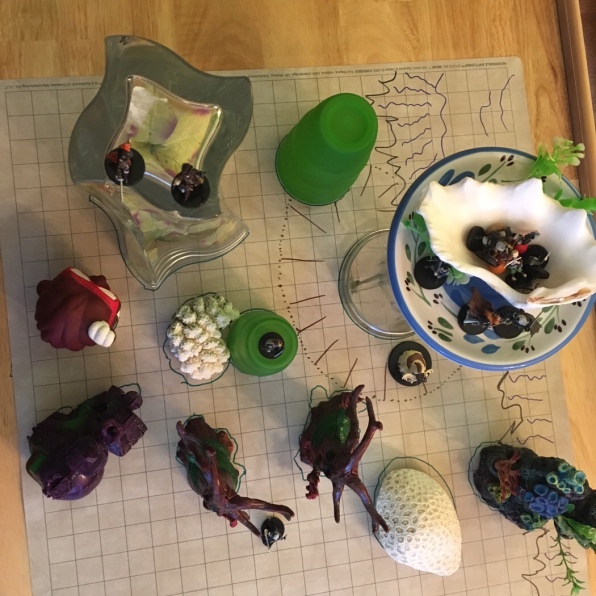 View of the battle map from above

The field is set! The harpies are ready to defend their nest with the stolen children. Will our heros save the day?

The harpy nest with the kidnapped kids in the nest (the seashell), surrounded by harpies on the ledge (saucer),

These notes are being added in November, 3 months after the game occurred. My game notes aren’t great, so some of the details are a little fuzzy.

Our band of adventurers were camped beside the free road when a band of 5 harpies swooped in and tried to steal all of their shiny goods. The harpies only managed to grab a couple of things before being chased off by the party, but not before losing one of their number.

The next day they arrive in the town of M’Ka. The town has netting strewn between the buildings, covering the streets of the small town. They soon discover that in the last 6 months harpies have grabbed 6 young children off the streets of M’Ka. The townsfolk have not been able to find where the children were taken or if they are still alive. Two of the kidnapped children are the mayor’s.

The mayor, Winnie Soolfulright, convinced the town to raise a “king’s ransom” in gold (12,000g) to pay the Keepers of Balance to rescue the children. The Keepers of Balance declined to take the job. The mayor offers to give the players the coin if they can bring back the kidnapped children. Our gallant heroes leap at the chance!

The next morning the cleric (Annabelle), the sorceress (Kethra), and the ranger (Aphodel) head east, in the direction they saw the harpies fly after the initial encounter on the roadside. They arrive in the small, ocean-side town of Ol’shire. The people there claim to know nothing of harpies, though it’s clear that some are lying.

The good folks of Ol’shire made a bargain with the harpies. The harpies would protect the town from the marauding pirates that had been troubling the town as well as not bother town and the town would keep people away from the harpies’ nests.

Harpies have a difficult time bringing their eggs term, often forgetting to keep the eggs warm when they left the nests to search for food or treasures or whatever drove these cursed beasts. So the harpies stole the youngest, easy-to-control children to warm the eggs while they incubated.

Our suspicious group leaves Ol’shire under the stealth of night and travels north along the coastline. They find several abandoned harpy nests along the way. Eventually they come to an area that shows signs of recent harpy activity.

They set up a trap near a grove of trees: a camp fire with shiny cursed armor, gems and a backpack filled with rocks as lures. Then they find climb the nearby trees and wait for the trap to spring. Much waiting occurs. It’s windy. One of the team almost gets blown off the tree branch they’re hiding on/clinging to.

The harpies approach, singing their songs. All but one of the adventuring group is able to resist the hypnotic pull. Battle ensues. With the use of sacred flame, scorching ray, and magic missiles the harpies once more run away before they can be captured or killed.

The team tracks the harpies back to their active nests. There are between 20-30 harpies making their home there. Our heroes don’t do a great job of hiding.

A harpy lands near where they are hidden and offers parlay. Offers to give these adventurer’s “shinnies” to go away. They have 3 eggs that are almost ready to hatch. They can have the kidnapped children back once they hatch in about a month. While intrigued by the offer of “shinnies”, which they learn are coins and magic items, they are not in favor of leaving the children with the harpies. The cleric offers to keep the eggs warm herself it they will release the M’ka children. The harpy doesn’t trust that the cleric would stay put or leave the eggs unharmed and declines the offer.

Negotiations break down. As a fight becomes imminent and terrified of being destroyed by these hardened killers, many of the harpies fly away, carrying as much of their loot as they can on the way. The polygamous group whose eggs these belong to stay.

At the same time as this chaos occurs, an old friend – Barbang, the dwarf fighter – is transported from Berlstrum to this battleground in thanks for aiding a hag. A battle between the remaining 7 harpies and the 4 adventures ensue. Five of the seven harpies are killed. The surviving two harpies grab the 3 eggs and one of the children and make their escape.

The newly abandoned nests are in huge old trees bent over the tall Briarstone cliffs. The tree with the children is surrounded at the base by a large water pit, placing the edge of land 25 feet from the trunk of the tree. The children warn the rescuers that there is a giant snake hiding in the water at the base of the tree. With the aid of several Ropes of Climbing, a Potion of Giant Strength, and some great climbing skill, they are able to get the 5 remaining children safely down from the nest without waking the giant snake. They are filthy, malnourish, and dehydrated, but otherwise unharmed. Anise Pennywise is the one that was carried away.

There is much happiness, rejoicing, and celebration upon the return of the 5 children to M’ka. They swear that they will find and bring back Anise. They also swear amongst themselves to find those shiny coins and treasures the harpy alluded to during the negotiations.

There's not a lot of money in revenge