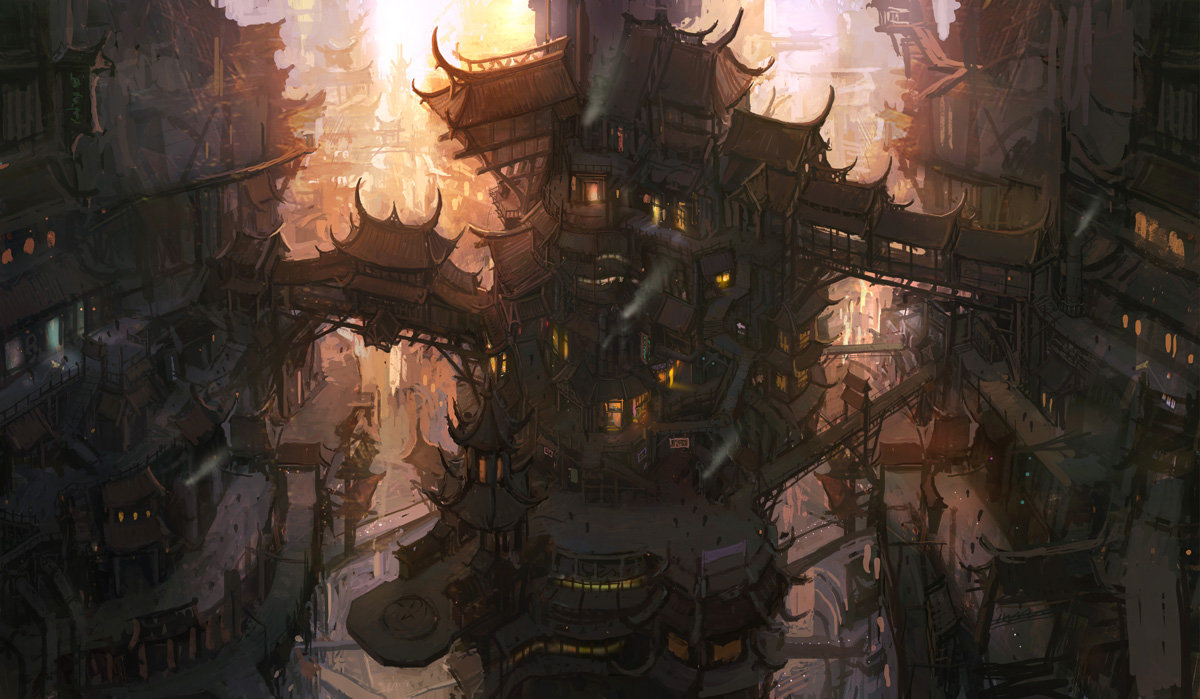 The town of Obsidian lies along the northern stretch of Briarstone’s Free Road, between Berlstrum and Goremont.

The population is primarily gnome. The ground floor is “human” size and scale, where the rather random levels off the ground are more comfortable for the shorter races.

Beneath the city is a well guarded secret, or at least not widely advertised to enemy forces. A large diamond mine runs many levels and tunnels underneath. The town has a dark gritty layer of coal dust that covers much of the town. Processing plants are a large source of employment here.

Yahkle Arodite (Dwarf); talkative cheerie fellow; closely shorn red hair;  no beard nor eyebrows; happy to spin a yarn about how his beard burn off and how lovely life as a dwarf is without a beard.

The Congregation of the Somewhat Virtuous

Buric VonBellor. 1/2-Elf male. Head honcho of mines – technically, the diamond mines belong to the country of Briarstone and the sovereign

Blades and other shady magic items

Leather and Cloth goods and armor

Possible Side Quests in Obsidian:

The owner of Sparks Refinery, Buric VonBellor, is losing minors in a new vein of the mine to a territorial Bullette that finds gnomes and halflings tasty. Buric is offering 500g per claw (12 claws per bullette) as proof of success. Buric volunteers Svensen, a portly gnome with anxious brown eyes, to take the party to the end of the new vein. Svensens not excited to be bullette bait.

Each adventurer is provided with a basic hooded lantern, if needed.

Located in the poorer part of town, behind a greasy food stand Berttle’s Bloody Blade sells questionable magic items, mostly bladed. Berttle is a angry, greasy gnome who bellows at his apprentice, Goffenmauker. Though Berttle is excessively polite to potential buyers.

Berttle has intel that there is a large boulder that contains the rare terrunium ore hidden way below the diamond mines of Obsidian. (For a description of terrunium, look under the Nation of Glort here: Dreadstorms Lost Campaign – Overview) The diamond mine operators want nothing to do with some stupid rock with terrunium. He sent his apprentice to find someone to sneak through the minds and retrieve the stone, but the hapless Goffenmauker has had no luck. No one familiar with the diamond operations wants to risk getting on their bad side.

Our adventurers enter the premise as Berttle is scolding Goffenmauker for his failure to procure some “dumb-ass idiotic adventure types” to get the stone. If the party is interested in taking the job, Berttle will offer to make a single bladed with terrunium with two minor enchantments in exchange for sneaking the boulder out of the mines.

To aid in the task, Berrtle will provide the party with:

I am still working on drawing fantasy cartography maps (is cartography and maps redundant?), but not as diligently as earlier this year. I've been distracted with traveling and running D&D games and all the other stuff that takes up one's day. And there's this game on my phone ... man, is it a time sink!

I am still working on drawing fantasy cartography maps (is cartography and maps redundant?), but not as diligently as earlier this year. I’ve been distracted with traveling and running D&D games and all the other stuff that takes up one’s day. And there’s this game on my phone … man, is it a time sink!

But to prove that I’ve been doing something, even if I have been ignoring my blog, I’m including a couple of in-progress sketches in the early stages of creation.

These map doodles are currently without names. Ideas are welcome.

While some might suggest that posting photos of my trip to Ireland here is a bit off topic. I'd argue that it was research. Research for drawing better castles and the like on my fantasy maps as well as inspiration for my D&D games!

While some might suggest that posting photos of my trip to Ireland here is a bit off topic. I’d argue that it was research. Research for drawing better castles and the like on my fantasy maps as well as inspiration for my D&D games!

Personally I still thinks it’s a friggin’ castle, not a “tower house”.

Bunratty was intereting in that they actually staged the rooms with furniture and nick-nacks, so you could see what it might have look like with people living in there.

Thoughts about games and hobbies

God gave Noah the rainbow sign, No more water, the fire next time